Share
Facebook Twitter LinkedIn Pinterest Email
DECATUR–The Rev. Quincy Lavelle Carswell,II has been named lead Chaplain for the DeKalb County Sheriff’s Office under the administration of Sheriff Melody Maddox.
Carlswell will succeed Dr. Curtis Crocker, Jr., who is retiring after serving in the position since 2007. With over 30 years in ministry, Crocker pastors Metropolitan Church in Columbus, GA. His bio states that he  was licensed and ordained at New Mercies Christian Church in Lilburn, GA under Pastor Jesse Curney, III. He was a founding member of New Mercies and a deacon. Crocker is active in the Atlanta area and Columbus, including his participation as a member of Leadership DeKalb, Omega Psi Phi Fraternity, the Mayors Commission to End Homelessness in Columbus, Georgia Law Enforcement Chaplains and he is a Silver Life Member of the NAACP. Crocker received bachelor’s and master’s degrees from Morehouse College and he was one of the first students to complete the Beulah Heights Doctoral Program.
In his new role at the DeKalb Sheriff’s Office,  Rev. Carswell will oversee a team of some 70 chaplains who provide spiritual awareness through life skills development for offenders at the DeKalb County Jail.  According to Carlswell’s bio, he began serving in 2012 as pastor of The Covenant Church in Decatur, GA alongside his father, Bishop Quincy Lavelle Carswell, who passed away in January 2020. Prior to becoming pastor, the younger Carswell served five years as the Youth and Young Adults Pastor at The Covenant Church. He was ordained as an Elder under the Covenant Fellowship of Churches in September 2009 and licensed as a Ministerl in September 2004. Carswell is a graduate of Morehouse College and Luther Rice University and Seminary, having earned a Bachelor of Arts degree in Sociology and Philosophy, and a Master of Divinity degree.
An affirmation ceremony for Carswell as Chief Chaplain will be held on Aug. 31, 7 p.m., at The Covenant Church, Boulevard, Decatur. 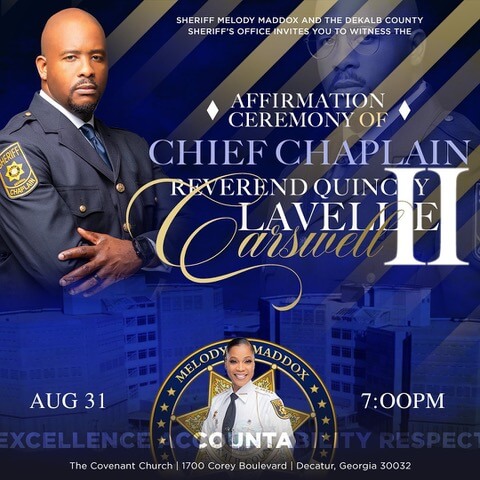 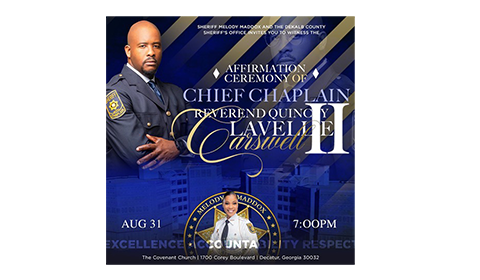