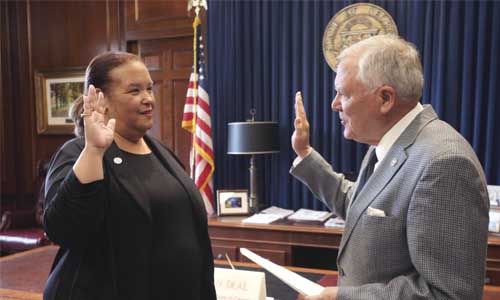 Even as Democrat Stacey Abrams refused to concede, Republican Brian Kemp stepped down on Nov. 8 as Secretary of State to begin his transition to governor-elect. Unofficial election results showed that only one percentage point separated Kemp, who had 50 percent of the vote to Abrams 49 percent.

Gov. Nathan Deal appointed Robyn A. Crittenden, a resident of Tucker, to fill the vacancy created by Kemp’s resignation. Crittendon took the oath of office to serve the remainder of Kemp’s term.

The race for Secretary of State was tight with Republican Brad Raffensperger and Democrat John Barrow headed for a run-off. Unofficial results showed that both had 49 percent of the vote.

Meanwhile, Deal’s appointment of Crittenden, makes her the first African-American woman to serve as a statewide constitutional officer in Georgia history. In 2015, Deal appointed Crittenden to be DHS commissioner after she served as executive vice president and chief operating officer of the Georgia Student Finance Commission. Following Crittenden’s swearing-in ceremony, Deal nominated Gerlda B. Hines, chief of staff and chief financial officer of DHS, to be the interim DHS commissioner, pending board approval.

“Robyn’s experience as an attorney, public servant and agency head make her exceptionally qualified to fill the role of Georgia’s Secretary of state,” said Deal. “She is a leader with brilliant intellect, high integrity, and a wide range of experience in public service. Robyn has been one of the most effective leaders within my administration and she is well-qualified to fill one of the most important jobs in state government. I appreciate her willingness to fill this role and I thank Gov.-elect Kemp for his leadership as Secretary of State.”

Crittenden has served as the commissioner of the Georgia Department of Human Services since July 2015. She previously served in the executive leadership of the Georgia Student Finance Commission. Crittenden’s experience includes working as general counsel at Morehouse College and as the assistant vice chancellor of Legal Affairs-Contracts for the Board of Regents of the University System of Georgia. She was also an assistant county attorney in DeKalb County and an associate at the law firm of Powell, Goldstein, Frazer & Murphy. Crittenden earned a bachelor’s degree in Political Science from Yale University and a law degree from the University of Michigan School of Law. She has one child and lives in Tucker.