DEKALB COUNTY, GA—The DeKalb County Board of Education in a 4-1 vote fired Superintendent Cheryl Watson-Harris on Tuesday during a virtual meeting, stating that the separation was effective immediately. Board Chair Vicki B. Turner, members Diijon DaCosta, Anna Hill and Joyce Morley voted in favor of terminating Watson-Harris, with Deirdre Pierce casting the dissenting vote. Board members Allyson Gevertz and Marshall Orson were absent.

The board named Dr. Vasanne Tinsley as the interim superintendent. Tinsley is a retired DeKalb educator who formerly served as the Deputy Superintendent of Student Support & Intervention in the district.

“The Board has the utmost confidence in Dr. Tinsley serving as the interim superintendent. The immediate departure of Mrs. Watson- Harris will have no bearing on the search for the next superintendent. The Board remains fully committed to an open and transparent process and supporting the students of DCSD,” Turner stated in a news release issued after the board’s meeting.

Turner told On Common Ground News that the board had lost confidence in Watson-Harris to address several critical issues including deplorable conditions at Druid Hills High School that threatened students and faculty members’ safety and health. The conditions were made public after students released a video showing damaged ceilings and walls, electrical hazards and plumbing issues that have existed for years at the school. The matter was brought to the attention of State School Superintendent Richard Woods. Turner sent a letter to Woods on Tuesday to address his concerns the same day it fired Watson-Harris.

“This was a difficult decision. You have a likeable person(Watson-Harris). But you have a number of issues that just weren’t being addressed, ” Turner said.  “…We didn’t need somebody to just hold the bus down; we needed someone to be driving and going in the right direction. In the end, we had to do what is right and equitable for our kids.”

Turner said for months, the district has been battling a negative image and needed to work to address issues:

Community activist Joel Edwards agrees about the negativity concerning the school district, but he says that the DeKalb Board of Education and the district’s administrators all must share in the blame for the problems that exist.

“The firing and all that has gone on is an eyesore on DeKalb County,” said Edwards, who is president of Restore DeKalb. ”We just need to clean house, look at the staff, do an external forensic audit to see how and where the money has been spent. Druid Hills isn’t the only school that has problems. You have sewage problems  and we’ve got kids practicing sports in the dark because the schools don’t have lights on the playing fields.”

Amos King, another community activist who hosts an internet talk show, blasted the board’s firing of the superintendent, saying she was a “scapegoat.”

“Many of the schools have problems—not just Druid Hills. My question is what has the board done to address these issues?” King said. “The board has to be held accountable for not addressing the issues.”

Watson-Harris told The Atlanta Journal-Constitution that the board’s decision to fire her caught her by surprise.

“I was blindsided,” Watson-Harris reportedly said in a statement to The Atlanta Journal-Constitution hours after the board voted to terminate her. “I was unaware that my contract for employment would be discussed. … I was not notified and it was not identified on the meeting notice.”

Following is the letter that DeKalb Board of Education Chair Vicki B. Turner sent to State School Superintendent Richard Woods in response to his concerns about conditions at district’s facilities: 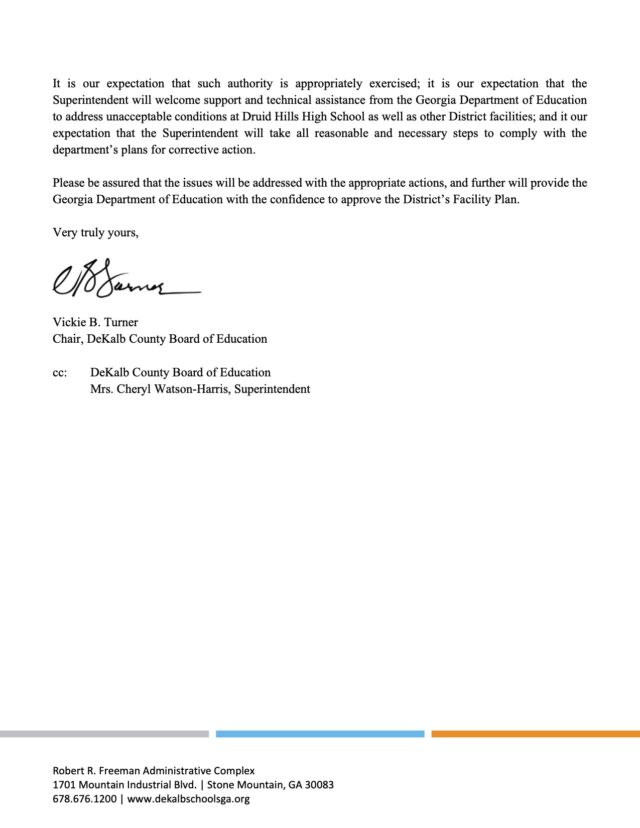